“I picked up my smoke, but as you can see, it comes in sacks these days!”
―Thomas

Three Tins of Smoke is a magazine story.

Early one morning, there is a rockslide at the entrance to a tunnel on Thomas' branch line. Diesel takes the Fat Controller to inspect it. The Fat Controller decides that they must close the line. He goes away to put up a notice to inform the passengers and gives Diesel the task of telling Thomas. Diesel sees this as an ideal opportunity to play a trick on the poor tank engine.

Diesel finds Thomas picking up Annie and Clarabel and tells him about the rockfall on his branch line. Thomas asks Diesel what he should do instead. Diesel tells Thomas that the Fat Controller wants him to collect three tins of smoke for his smokebox as he seems to be running out.

Thomas clatters over to the railway stores and tells a workman that he needs three tins of smoke. The storeman informs Thomas that someone has played a trick on him, but asks if Thomas will take a bag of plaster to the handyman working at the main station. Thomas leaves the store with the bag of plaster, feeling very silly indeed. He decides that he must get even with Diesel.

When Thomas arrives at the main station, he is still thinking about a trick he can play on Diesel as revenge. The handyman comes over to Thomas' train to collect the bag of plaster. Diesel pulls in and asks Thomas if he managed to collect his tins of smoke. Suddenly, the handyman trips over and the sack of plaster splits open. Diesel is covered in a cloud of plaster dust. Thomas says he has picked up the smoke, but it comes in sacks nowadays. This causes everyone to burst out laughing. 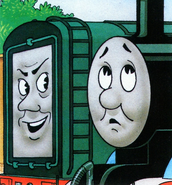 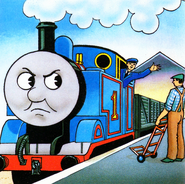 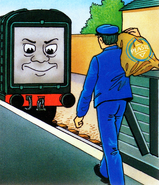 Add a photo to this gallery
Retrieved from "https://ttte.fandom.com/wiki/Three_Tins_of_Smoke?oldid=1074855"
*Disclosure: Some of the links above are affiliate links, meaning, at no additional cost to you, Fandom will earn a commission if you click through and make a purchase. Community content is available under CC-BY-SA unless otherwise noted.