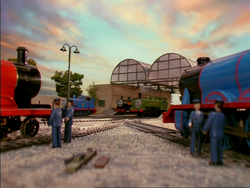 Tidmouth is a large town on the west coast of Sodor. It has a large station that acts as one of the Main Line terminuses in the Railway Series and as the first station on Duck's Branch Line in Thomas & Friends.

Did you know? In The Railway Series, Tidmouth was the big station but in the TV series, this was changed to Knapford.