The Tidmouth, Knapford and Elsbridge Light Railway (TK&E) was one of the original three standard gauge railways on the Island of Sodor. Its trackbed now forms Thomas' Branch Line from Knapford Harbour up to Elsbridge and the segment of the Main Line between Tidmouth and Knapford.

The first railway in the western area of Sodor was originally horse-operated. Its origins begun when the Ulfstead Mining Company became interested in minerals at the high ground to the south-east of Toryreck but due to surrounding fenlands could not extract or transport them by land and the section of the River Els from Elsbridge to Knapford was hazardous. To overcome the issue in 1883 they called in A.W.Dry & Co, a firm who had the necessary experience from their engineering work on overcoming drainage problems in East Anglia. A.W.Dry & Co built embankments across the flats north and south of the river and installed tide gates. With the addition of an embankment along the south eastern side of the River Els the water was allowed to flow into a pool along its opposite side that was left undeveloped. From here it was drained off everyday at low tide. The line itself began from the wharf at Elsbridge and curved east to the mines at Toryreck and from there, keeping to the firmest ground, swung round on top of the embankments in a wide curve to bypass the remaining fenland to reach the harbour at Knapford. The line opened in 1885 as the Elsbridge and Knapford Railway.

The harbour however proved a disappointment as it needed constant dredging and by 1905 the cost had become prohibitive. Under recommendation from A.W.Dry, the mining company abandoned the harbour in favour of extending the line around the coastline to Tidmouth. Horses were not deemed appropriate for the longer haulage of the (mostly lead) minerals and A.W.Dry's young engineer Mr. Topham Hatt, was tasked to build light locomotives in their place. At Tidmouth he built four vertical boiler engines which were soon nicknamed the Coffee Pots. All went well until autumn 1908, when the coastal section of the line was destroyed by a severe storm. The disruption of the tramway route lead to unemployment. With personal and financial ties to the mining company's operations A.W.Dry helped arrange a loan from the Treasury to put the miners back to work by cutting a tunnel directly to Tidmouth. This operation was overseen by Topham Hatt and the first train steamed through in July 1910. The route lead to the renaming of the company to become the Tidmouth, Knapford and Elsbridge Light Railway.

In 1912, it was amalgamated with the Wellsworth and Suddery Railway to form the Tidmouth, Wellsworth, and Suddery Railway (with Mr. Topham Hatt keeping his position). Two years later, the railway joined with the Sodor and Mainland Railway to create the North Western Railway and a second tunnel was bored to complete the mainline by 1916. With this the Coffee Pots were demoted to only operate from between the bay platform at Knapford and up to Elsbridge. Through interests at Anopha Quarry, the Elsbridge Branch line was extended to Ffarquhar between 1924 and 1925. After a trial period at Wellsworth, Thomas was chosen to take over the extended line. However, the Coffee Pots remained on the line for several years as spare engines

When Knapford station was relocated to the north side of the river Els between 1955 and 1956 as part of a harbour improvement scheme, the original lines met the new route at Toryreck Junction. This original section is now relegated to mostly freight operations and is commonly referred to as the Harbour Line.

The Coffee Pots
Add a photo to this gallery 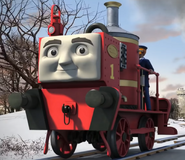 Glynn (formerly)
Add a photo to this gallery
Retrieved from "https://ttte.fandom.com/wiki/Tidmouth,_Knapford_and_Elsbridge_Light_Railway?oldid=1695972"
*Disclosure: Some of the links above are affiliate links, meaning, at no additional cost to you, Fandom will earn a commission if you click through and make a purchase. Community content is available under CC-BY-SA unless otherwise noted.