Tidmouth Hault Sheds is a building located next to Tidmouth Hault Station on Duck's Branch Line in the television series. The shed was constructed in 1964, when the branch line was re-opened. Generally, the shed has been used for storing trucks, however Thomas, James and Percy were once seen in the shed in the fifth series episode, Thomas, Percy and Old Slow Coach.

The sheds under construction in the third series

Thomas, James and Percy inside the sheds in the fifth series

Percy and Old Slow Coach next to the shed 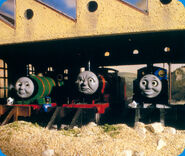 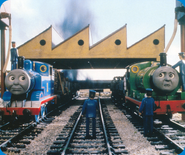 Add a photo to this gallery
The Little Western
* RWS only | ** T&F only | *** Other Media only
Retrieved from "https://ttte.fandom.com/wiki/Tidmouth_Hault_Sheds?oldid=1783765"
*Disclosure: Some of the links above are affiliate links, meaning, at no additional cost to you, Fandom will earn a commission if you click through and make a purchase. Community content is available under CC-BY-SA unless otherwise noted.