Tiger Thomas, republished and slightly altered in 2010 and 2012, being retitled Park Life in the latter, is a magazine story.

One day, Thomas is taking some schoolchildren on a trip to the Wildlife Park. He thinks the trip will be more fun if he dresses up, so he has a big orange sheet over his boiler with black strips on - just like a tiger! When they get to the Wildlife Park, the children are not allowed in. An African deer with sharp horns has escaped and it would be unsafe for the children to encounter. The children are sad, so, to cheer them up, Thomas roars like a tiger. Suddenly, a startled deer comes running out from the bushes. It is the escaped African deer who thinks Thomas is a real tiger. The keepers soon capture the deer and calm him down; allowing the schoolchildren to visit after all. Thomas has been the hero of the day. 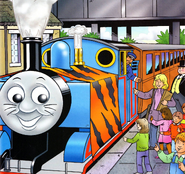 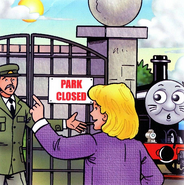 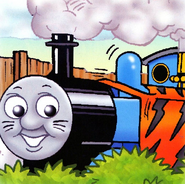 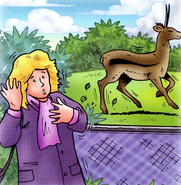 Add a photo to this gallery
Retrieved from "https://ttte.fandom.com/wiki/Tiger_Thomas?oldid=1770360"
*Disclosure: Some of the links above are affiliate links, meaning, at no additional cost to you, Fandom will earn a commission if you click through and make a purchase. Community content is available under CC-BY-SA unless otherwise noted.