“My character Ashima really shines through as being strong and adventurous and I am particularly pleased that she will be such a positive role model for so many girls across the globe.”
―Tina Desai referring to her role

She is known for appearing in various Hindi-language films such as "Yeh Faasley", "Sahi Dhandhe Galat Bande", "Table No. 21" and "Dussehra".

Internationally, she is most famous for her roles as Sunaina in "The Best Exotic Marigold Hotel" series and as Kala Dandekar in Netflix's sci-fi drama series "Sense8".

Tina Desai behind the scenes of "The Great Race" 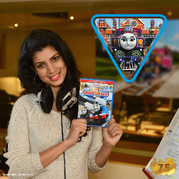 עברית Polski Русский
*Disclosure: Some of the links above are affiliate links, meaning, at no additional cost to you, Fandom will earn a commission if you click through and make a purchase. Community content is available under CC-BY-SA unless otherwise noted.
Advertisement