Tinsel on the Tracks

Ultimate Friendship Adventures
Tinsel on the Tracks is a US DVD featuring five episodes from the twentieth series.

Unwrap Christmas cheer with Thomas & Friends™. Percy delivers Santa's Christmas letters while Marion discovers a talking Christmas tree! Glynn the coffeepot engine gets restored for the holidays and races against Stephen. Annie and Clarabel learn that two wrongs don't make a right, while Donald and Douglas have double trouble. Have a holly, jolly Christmas with Thomas and his friends!

Part of the main feature 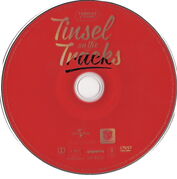 Bonus Features
Add a photo to this gallery

Retrieved from "https://ttte.fandom.com/wiki/Tinsel_on_the_Tracks?oldid=1866393"
*Disclosure: Some of the links above are affiliate links, meaning, at no additional cost to you, Fandom will earn a commission if you click through and make a purchase. Community content is available under CC-BY-SA unless otherwise noted.