Toby's Old Tramway was Toby's original home before he came to work on the North Western Railway. It featured in one book of the Railway Series and in several series of the television series (it only made one official appearance in the first series). It is based on the Wisbech & Upwell Tramway.

Toby's old line was located somewhere in East Anglia, England. The Railway Series describes the railway running through farms past fields and villages, ending at a station where the line junctions with the mainline to London and "elsewhere". Toby, with his coach Henrietta, used to work on the railway delivering goods from the farms to the junction or other stations. The line also took passengers. Some time during the early 1950s, Toby's line went bankrupt, thanks to the lorries and buses taking over most of the work. Then the line closed, and Toby and Henrietta were sold to the Fat Controller to assist Thomas with trains on the quarry line. The line was abandoned and dismantled under the Beeching axe in the mid 1960's.

In the television series, Toby's old line (known as Toby's Branch Line) was located somewhere in northern Sodor. The line started at Arlesdale End, where Toby's shed was, and then passed by a windmill, and through a small rocky cliff next to a bay. It then goes through a valley past an old castle, before arriving at the station of Lower Arlesburgh; it is not known where it goes from there.

The line closed after competition by buses and lorries forced it to shut down. After the last train, Toby was put into the shed, but was soon bought by the Fat Controller.

Many later episodes show scenes from the old line quite often. Series 10-12 commonly feature Arlesdale End and Toby's old shed. They were later seen again in CGI from the fifteenth series. 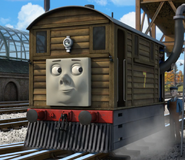 Toby (formerly)
Add a photo to this gallery

Henrietta (formerly)
Add a photo to this gallery 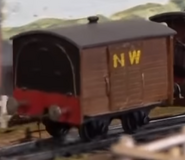 Elsie (formerly)
Add a photo to this gallery

Toby's Old Tramway's Basis, The Wisbech and Upwell Tramway
Add a photo to this gallery

The Rickety Old Bridge
Add a photo to this gallery
United Kingdom
* RWS only | ** T&F only
Retrieved from "https://ttte.fandom.com/wiki/Toby%27s_Old_Tramway?oldid=1662511"
*Disclosure: Some of the links above are affiliate links, meaning, at no additional cost to you, Fandom will earn a commission if you click through and make a purchase. Community content is available under CC-BY-SA unless otherwise noted.