“It's that Toby. He's a fusspot. He..."
"Toby has forgotten more about trucks than you will ever know.”
―Mavis and the Quarry Manager argue about Toby[src]

Toby is a brown square tram engine who works on the North Western Railway and is the railway's number 7 engine.

Toby originally worked on a tramway in East Anglia, however was later brought to Sodor after his line closed down to run the tramroad to Ffarquhar Quarry. He has three coaches - Henrietta, the Quarryman's Coach and Victoria - as well as a luggage van named Elsie.

Toby was built by James Holden at the Great Eastern Railway's Stratford Works in Stratford, London, England circa 1914. He originally lived at a harbour in East Anglia with his brothers. Sometime between 1945 and 1946 Toby was chosen to be an attraction at a seaside village's festival and was repainted and polished for the event. However, after helping their branch line's engine and seeing how smart he looked, the branch line was afraid that he would show them up and did not let him join in the festival. After that he worked on an unnamed tramway in East Anglia. In 1951, Toby came to work at the quarry on Thomas' Branch Line after his tramway closed, as it was found to be illegal for Thomas to go on the Quarry Tramroad without side plates or cowcatchers. At first, Toby was teased by James for his shabby paint. However, James stopped teasing him after he crashed into some tar tankers.

Toby also got into a bit of trouble with a diesel shunter named Mavis, as she was unwilling to shunt trucks where they needed to be placed. After an accident, the two engines made up their quarrel and became good friends.

When Mavis was sent to the works after her accident with a lorry, Toby did her work at the quarry, leaving Percy to do Toby's work as well as his own. Toby once came off the rails at a crossing when the earth was swollen over the rails and ended up on the road. Luckily, with the fireman guiding the driver, they managed to reverse Toby back on the rails. the Fat Controller, however, heard about it, but rather than being cross, he only joked with him and told him that he should leave the roads to what they were made for.

By 2007, Toby was having trouble taking the workmen to the quarry as Henrietta did not have enough room in her to carry them all at once. Bertie usually helped, but one day, he was ill and Henrietta was so full that some workmen even had to ride on her balcony. As he went past a part of his line that went through a town, he stopped quickly when a car came out of a side street and nearly collided with him. To make matters worse, a policeman witnessed the workmen riding on Henrietta's balcony. After he made a report, an inspector spoke to the quarry manager, telling him that passengers were not allowed to ride on coach balconies. Luckily, Thomas managed to help Toby when he found an old and worn out coach named Victoria, who was used as a summer house for many years when she was taken out of service. Victoria was eventually restored and now works with Toby and Henrietta along their line.

Toby is old, but wise, hardworking and knowledgeable enough about running branch lines to justify running Thomas' line with Daisy after Percy's accident with the trucks until Thomas came back. He is also savvy enough to control the trucks. However, his advanced age and design means that he is weaker than the other engines. While Toby is always ready to work hard without any fuss, he can be a bit temperamental sometimes, especially when young and inexperienced engines who are full of themselves make things difficult for him, particularly Mavis and Daisy. However, work at the quarry line often soothes off his moods without any cause of grief to anyone, except of course his old faithful coach, Henrietta.

Toby is based on a GER Class C53 0-6-0T Wisbech steam tram (reclassified as J70 by the LNER) built at Stratford Works. They were seen by the Rev. W. Awdry and Christopher Awdry on a holiday at Yarmouth, hence Toby's origins. The J70 started their career on the Great Eastern Railway and were known as C53. They spent most of their career on the Wisbech and Upwell tramway pulling slow goods trains and, until 1927, passenger trains, though several were also assigned to the docks at Ipswich and Yarmouth. The first withdrawal came in 1942. Eventually, the sole survivor of this class was withdrawn from service and scrapped at Stratford Locomotive Works by 1955. They were replaced by BR Class 04s, Mavis' class.

According to The Island of Sodor: Its People, History and Railways and Sodor: Reading Between the Lines, Toby's original number plates had been removed prior to his arrival in 1951. However, it is noted that BR no. 68221 was withdrawn around this time, implying this was his original number. This tram was built as GER no. 127 on 30 June 1914 as part of a batch of three at Stratford. In 1924, after the grouping, it became LNER no. 7127, this changing to no. 8221 in May 1946 under Edward Thompson's 1946 re-numbering scheme. Upon nationalisation on 1 January 1948, it became no. 68221 in July 1948. It was withdrawn on 31 May 1951 from Ipswich Shed and scrapped at Stratford shortly after. 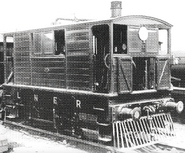 Toby is painted chocolate brown with blue sideplates and black cowcatchers. His number (7) is painted on his middle side panel in yellow with a red outline. He has red bufferbeams.

When he first arrived on Sodor, Toby was a much duller brown with grey sideplates and cowcatchers and no number. Prior to this - when he worked at a harbour - Toby had black cowcatchers and sideplates with his company's initials (LNER) painted on his side plates in yellow.

North Western Railway
* RWS only | ** T&F only | --- Dropped
Ffarquhar Branch Line
* RWS only | ** T&F only
*Disclosure: Some of the links above are affiliate links, meaning, at no additional cost to you, Fandom will earn a commission if you click through and make a purchase. Community content is available under CC-BY-SA unless otherwise noted.
Advertisement