Toby and the Stout Gentleman

Toby and the Stout Gentleman (released in the US as Toby the Tram Engine) is the second Buzz Book based on the first series episode of the same name. It is illustrated using photographs from the television series.

Whilst on holiday, the Fat Controller meets a charming, old-fashioned steam tram named Toby. A while later, Toby's line is closed down and Toby is shut in the shed all alone... 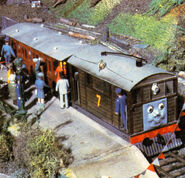 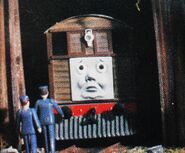 Add a photo to this gallery
Retrieved from "https://ttte.fandom.com/wiki/Toby_and_the_Stout_Gentleman_(Buzz_Book)?oldid=1662496"
*Disclosure: Some of the links above are affiliate links, meaning, at no additional cost to you, Fandom will earn a commission if you click through and make a purchase. Community content is available under CC-BY-SA unless otherwise noted.