Tom Rolt is a passenger engine that works on the Talyllyn Railway.

Tom Rolt was built at the Talyllyn's Pendre Works, using parts of a seldom-used 3ft gauge Andrew Barclay 0-4-0WT, built in 1949 for Bord na Mona, the Irish turf board. An 0-4-2T, it is the line's newest, largest, most powerful steam engine, having entered service in 1991. It is named after the author L. T. C. Rolt, who inspired the Talyllyn's preservation and was its manager in 1951 and 1952.

In August 2000, Tom Rolt returned to service after its annual boiler inspection and overhaul. It always carries the Talyllyn Railway's livery of deep bronze green. In 2007, Tom Rolt was withdrawn from service for an overhaul but came back into service in early 2009.

Ivo Hugh is based on Tom Rolt.

Tom Rolt is running in the Talyllyn Railway's livery of deep bronze green with black and yellow lining. 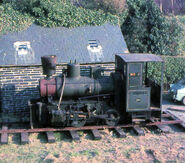 Tom Rolt prior to rebuild

Tom Rolt with Prince and Russell

Tom Rolt with a face to resemble Ivo Hugh
Talyllyn Railway
עברית Polski Русский
*Disclosure: Some of the links above are affiliate links, meaning, at no additional cost to you, Fandom will earn a commission if you click through and make a purchase. Community content is available under CC-BY-SA unless otherwise noted.
Advertisement