Sometime in 1924
Tomy (stylised as TOMY; known as Takara Tomy in Japan) is a Japanese toy manufacturer. In 2011, the company acquired Learning Curve and all the product ranges distributed by them. Tomy has produced the following Thomas & Friends products: 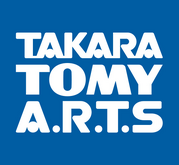 James, Percy and Sir Topham Hatt models were exhibited at Tomy's booth during the 1995 Tokyo Toy Show held at Makuhari Messe on 1-4 June 1995.

The board says, "These models were made for filming the TV series."