“Ahoy, careful with that cargo, shipmate!"
"You can't keep still, you oily diesel!”
―Salty and Cranky

Too Tired is a magazine story.

There is trouble at the docks. First, a load of pipes Cranky's unloading nearly knocks Oliver's funnel off. Next, Cranky is lifting a sandbag which he drops beside Salty's truck. The next moment, some noisy seagulls land on Cranky's crane arm. He swings round to get rid of them, but his crane arm almost hits BoCo, who has just arrived. The engines work out that it is the seagulls that are keeping the crane awake. They decide that if Cranky does not get some sleep soon, he will make their work unbearable. Salty has an idea and rolls over to a fishing trawler where he speaks to the skipper. Soon the plan is put into action and the trawler chugs out to sea and the fishermen throw a few fish overboard. The seagulls immediately leave Cranky to get their food. Cranky dozes off at once. The engines, who are careful not to wake the sleeping crane, are delighted. 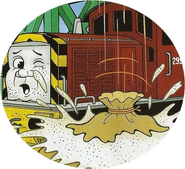 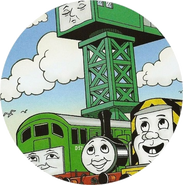 Add a photo to this gallery
Retrieved from "https://ttte.fandom.com/wiki/Too_Tired?oldid=1675342"
Community content is available under CC-BY-SA unless otherwise noted.