“I'm stuck here with nothing but sand to see. You can enjoy all sorts of sights while you work. I'd give my old anchor to be back on the water!”
―Bulstrode[src]

Too Wet is a magazine story.

One sunny day, Percy puffs busily along the seaside line, bringing people to the beach. Soon, Percy spots Bulstrode nearby. Percy says it is all right for him, just getting to sit on the beach all day. Bulstrode does not like Percy's remark; he is growing tired of having nothing to see but sand. Bulstrode misses the sea dreadfully.

Percy splashes into the deep floodwater which rises right up to his boiler. Rain pours into Bulstrode's hull and down Percy's funnel. They are stuck in the cold and heavy rain. A few hours later, the storm passes and Harvey is sent to their rescue. Bulstrode demands to be taken back to the beach; he would rather be high and dry and bored.

From they day on every time Percy and Bulstrode meet at the beach, neither of them complain, not even once. 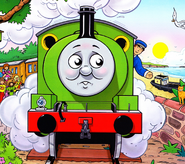 Add a photo to this gallery
Retrieved from "https://ttte.fandom.com/wiki/Too_Wet?oldid=1237122"
Community content is available under CC-BY-SA unless otherwise noted.