Thomas the Tank Engine Wikia
Register
Don't have an account?
Sign In
Advertisement
in: Other railways, Electric locomotives, Promotional Videos,
and 7 more
English

Tracy is an electric tram who Thomas met during a visit to Melbourne, Australia.

Tracy is a friend of Shane who works on the tramway network around the city of Melbourne. One day, while Thomas was visiting Australia, she was supposed to take the Western Bulldog players from Footscray Station to the iconic MCG for a football match, but Tracy broke down due to her electric line getting disconnected. Fortunately, Thomas had space in his coach and was able to take the players to their match on time.

Tracy was repaired in time for the Grand Final, and helped Thomas and Shane take passengers to the game when their coaches became full. Afterwards, the three found a place to watch the game. During the game, the ball was kicked towards them, and she and Shane encouraged Thomas to catch it and score a goal, which he did. When the game finished, Tracy and the others took their passengers home.

The next season, Tracy was transferred from Melbourne to Adelaide to help transport people to AFL Woman's matches. Thomas and Shane also came to the city, searching for the AFL Cup, with the tank engine briefly mistaking Tracy for it. A player then invited the trio to watch the match they were about to play. During the match, Tracy "kicked" the ball and scored. Following this, the two steam engines left, with Tracy wishing them good luck on their search.

Tracy is based on the W-class Melbourne trams, a family of trams that was built between 1923 and 1956 as a standard design to work the tramway network of Melbourne, Australia. She appears to be of the W6 sub-class, which were built between 1951 and 1955. Many W-class trams are preserved throughout Australia and New Zealand, while others have been preserved in the United States, Canada and Denmark. 12 remain in service on the Melbourne tramway network.

Tracy is painted MMTB green with a cream top half and lining. She has brown advertising boards on her sides. 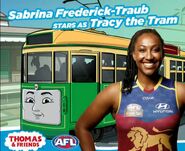 Australia
International Characters
* RWS only | ** T&F only | ✦ Changed location
Русский
*Disclosure: Some of the links above are affiliate links, meaning, at no additional cost to you, Fandom will earn a commission if you click through and make a purchase. Community content is available under CC-BY-SA unless otherwise noted.
Advertisement