Trouble in the Tunnel

Trouble in the Tunnel is a Step Into Reading book released in the summer of 2010 published by Random House.

Thomas, Bash, and Dash are shunting flatbeds of Jobi Wood inside a tunnel. Suddenly the tunnel starts crumbling and they are trapped! Thomas notices a small hole above him and puffs out "smoke signals" from his funnel. Percy sees the smoke from Brendam Docks and goes for help, and the engines are soon rescued. 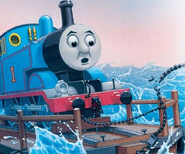 Add a photo to this gallery
Retrieved from "https://ttte.fandom.com/wiki/Trouble_in_the_Tunnel?oldid=1723788"
*Disclosure: Some of the links above are affiliate links, meaning, at no additional cost to you, Fandom will earn a commission if you click through and make a purchase. Community content is available under CC-BY-SA unless otherwise noted.