“I shouldn't have to pull trucks. Trucks are so dirty, and gravel trucks are the worst! It seems like a job more suited to an engine like Bill or Ben?”
―James

Trouble on the Track

Thomas the Tank
Engine and Friends
75

Trouble on the Track is a magazine story.

James is a splendid red engine and has his own idea about which sort of jobs he should do. One morning, James takes a look at his timetable and sees he is supposed to deliver trucks of gravel to the big harbour. James is not happy; he thinks a job like that is more suited to an engine like Bill or Ben.

Bill and Ben bring the trucks of gravel for James from the quarry. James meets them in the yard and tells them they have to carry on to the big harbour. Bill and Ben are confused; they thought that was his job. James says he has to pull a passenger train, but what he fails to tell the twins is that the passenger train isn't due until later in the afternoon. The twins make their way to the harbour. They are now very tired and the trucks are being very troublesome. They bump and spill some of their gravel.

Later that morning, Bertie is travelling over the level crossing when suddenly there is a long bang and a hiss. Bertie has a flat tyre, right on the main line. Bertie's driver gets out to examine the situation and is cross to find pieces of sharp gravel all over the crossing. Just then, James approaches with his passenger train and whistles to tell Bertie to move, but of course, Bertie can't move. Bertie says it's not his fault that there's gravel on the line and James says it's not his fault either.

Then, Bill and Ben pull up on the opposite track on their way back from the harbour with their empty trucks. The trucks hear James protesting his innocence over the gravel and they blame the twins. Bill and Ben blame James for not helping them.

At last, the Fat Controller arrives to sort the problem out. He is not interested in whose fault it is and says if everyone can stop arguing, they can fix Bertie's tyre and move him on which is exactly what happens. Afterwards, the Fat Controller gives James the job of taking the next load of gravel. 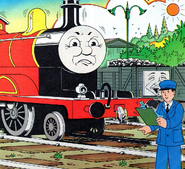 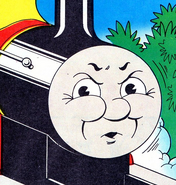 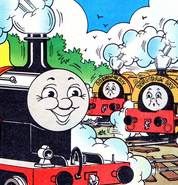 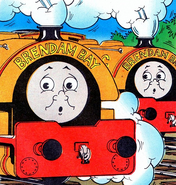 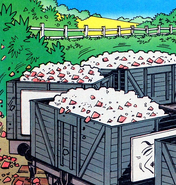 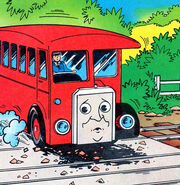 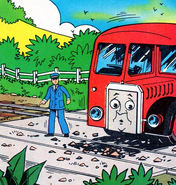 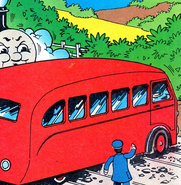 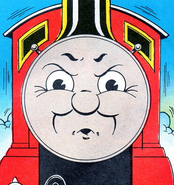 Add a photo to this gallery
Retrieved from "https://ttte.fandom.com/wiki/Trouble_on_the_Track?oldid=1261665"
Community content is available under CC-BY-SA unless otherwise noted.