“We're both clear of tube trouble now!”
―The Fat Controller

The Fat Controller is always very busy, but one cold day, he starts puffing and working slowly. He does not feel well at all. It is not long before Henry pulls into the station. One of his passengers is a doctor, who the stationmaster asks to give the Fat Controller a check-up. 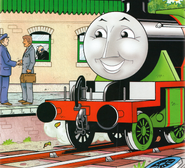 Add a photo to this gallery
Retrieved from "https://ttte.fandom.com/wiki/Tube_Trouble?oldid=1262243"
*Disclosure: Some of the links above are affiliate links, meaning, at no additional cost to you, Fandom will earn a commission if you click through and make a purchase. Community content is available under CC-BY-SA unless otherwise noted.