“You and your bridleway, Farmer Collett! At the speed you travel it should be called an idleway!”
―Thomas' driver

Turntable Bridge is a magazine story.

One day, Thomas spots Farmer Collett travelling to the village on his horse. He is complaining that Thomas' Branch Line has spoilt the bridleway as, when the line was constructed, it cut the route in two and they forgot to put in a bridge for people using the bridleway. Thomas' driver promises to pass on the complaint to the Fat Controller who tells the driver that he will buy an old turntable from the Mainland cheap. Thomas is puzzled as the farmer needs a bridge - not a turntable.

Farmer Collett is puzzled, too; his horses do not need a turntable to turn themselves around. The farmer boards Thomas' train and they set off, running alongside the bridleway. After his branch line train, Thomas is sent to the harbour to collect the old turntable. They then take it to the farm where Farmer Collett and the Fat Controller are waiting. A bridge is then constructed using the old turntable. Now it is just like the "Good Old Days" and Thomas names the bridge, rather fittingly, Turntable Bridge. 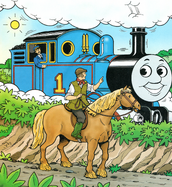 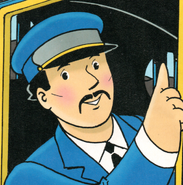 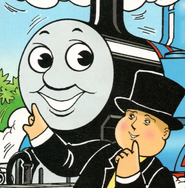 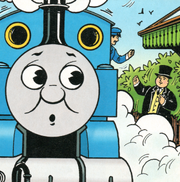 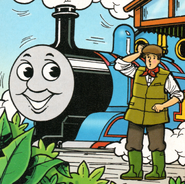 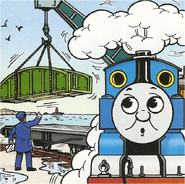 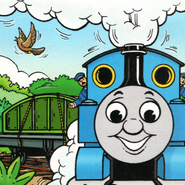 Add a photo to this gallery
Retrieved from "https://ttte.fandom.com/wiki/Turntable_Bridge!?oldid=1684325"
*Disclosure: Some of the links above are affiliate links, meaning, at no additional cost to you, Fandom will earn a commission if you click through and make a purchase. Community content is available under CC-BY-SA unless otherwise noted.