West of Ballamoddey, Island of Sodor

1
Ulfstead Road was the summit station of the Mid Sodor Railway. The station is named after the nearby road that links Ulfstead to Peel Godred.

Ulfstead Road stands at 867ft above sea level, 264ft higher than Cas-ny-Hawin, though the two places are, as the crow flies, only 1½ miles apart. To reduce the gradient to manageable proportions, the Mid Sodor decided to climb the mountain in a series of loops, increasing the distance between the two places to 6 miles. Due to scanty clearances, the inspector ordered that all carriage doors should be locked between Arlesdale and Ulfstead Road.[1]

In the 1890s, Galahad Qualtrough served as stationmaster of Ulfstead Road. Two men, Bill Shuvvel, with his traction engine, and Josh Herder, with his troupe of cows, would commonly come to an impasse on the nearby bridge and create a traffic jam. Bill generally got the best of the confrontations, due to Josh's cows losing interest and searching for entertainment elsewhere and stray on to Station premises, much to the anguish of Stationmaster Qualtrough. While Josh was rounding up his strays, Bill would take his chance and leave.[3]

The Mountain section of the Mid Sodor Railway was closed in 1936 and with it Ulfstead Road.

The station in The Railway Series 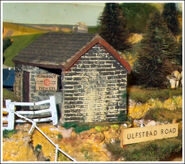 The Rev. W. Awdry's model of the station at Ulfstead Road

Mid Sodor Railway
* RWS only | ** T&F only
Русский
*Disclosure: Some of the links above are affiliate links, meaning, at no additional cost to you, Fandom will earn a commission if you click through and make a purchase. Community content is available under CC-BY-SA unless otherwise noted.
Advertisement