Tinsel on the Tracks

Extraordinary Engines
Ultimate Friendship Adventures is a US DVD which contains five episodes from the twentieth series and five from the nineteenth series.

Double up on your delivery of Thomas & Friends™ with 10 action-­packed stories! All aboard for exciting rescues, engines tuning up and flocks of new friends. Learn how to work together, build new friendships and ride the roads or rails for a rainbow of adventure. 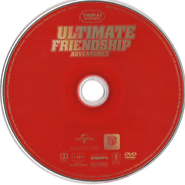