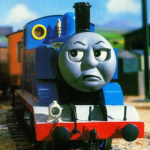 “You have a horror film called 'Alien'? That's really offensive, no wonder everyone keeps invading you!”
―The Twelfth Doctor, Last Christmas (2014)

I'm 16, and have been an avid Thomas fan for as long as I can remember. I think my first experience of Thomas was my prized possession at the time: the complete second season on video. I remember watching the second video (A Close Shave to Thomas and the Missing Christmas Tree) much more than the first video (Thomas, Percy and the Coal to Dirty Work), mainly because I loved the episodes with Donald and Douglas! I also vaguely remember watching episodes such as Thomas and Bertie and Dirty Objects on television at my childminder's when I was about 3.

I remember starting to collect ERTL Models. I spent – quite literally – hours and hours on my floor, with about 50 ERTL models scattered across my carpet. My collection grew, and then expanded to a small number of Take-Along models.

When I was about 7, my dad made me a model railway, and bought me Hornby Thomas. My Hornby collection then started to grow, but never got very far! They were just too expensive! I bitterly regret not buying Hornby Oliver when I had the chance, not knowing it would be discontinued.

Then, in 2012, something happened that would trigger the growth of my model railway once more: I discovered Bachmann. Somehow, I found Simon Martin's Edward vs. Edward review on YouTube, and was fascinated by the detail, quality and price of the Bachmann models. Living in the UK meant that I had had no contact with the American range. I found a website that supplies the models here from the USA at a reasonable price. I have spent a shameful amount of my pocket money on engines and rolling stock for my model railway recently!!

Also in 2012, I started learning the original Thomas & Friends theme tunes on piano, which have been improving of late. I upload them onto YouTube; my channel is called crovansgate7698.

I am also a railway enthusiast: I have been to the National Railway Museum in York on numerous occasions, and am planning a trip to the Talyllyn Railway in Wales in July 2014. In July 2013, we had four steam locomotives come to my local railway station, including Mayflower and Duchess of Sutherland. In 2014's steam gala, Union of South Africa steamed in alongside some tank engines and another tender engine.

Thomas & Friends has had a huge influence on my life, its morals, its values, its merchandise, everything! Even my work ethic has improved somewhat with one certain quote: "There are two ways of doing things: the Great Western way, or the wrong way!"

Outside of Thomas and Friends, I'm also proud to call myself a Whovian. I love Doctor Who, and my friends on Twitter can testify to this, as I'm often making references to it - that only a few understand - and complaining about writers, usually Steven Moffat!

I am also a "Lovatic" - i.e. a Demi Lovato fan. At the time of writing, my favourite of her songs is 'Give Your Heart a Break', although that changes on roughly an hourly basis!

I'm also one of those thespian nutters. You know, the freaks that dedicate months of their life to a show that lasts for four nights! In April 2015, I will be playing the part of Wilbur Turnblad in my local performance of the musical Hairspray.

Though not what you'd call a sportsman (!!), I play a lot of tennis - with less ability than I'd like - and like going on long walks with my dog.

My view on the Thomas fanbase

There are many, many problems with this "community" at present. The number one problem is that 90% of us lack basic tact. I admit that I am occasionally guilty of this. We express our opinions as facts, and we are unable to accept that anyone else's opinion is correct or valid. This leads to ridiculous, caps-locked arguments over stupidly petty subjects.

Then, of course, there are the noobs. I am fortunate in that I entered the fanbase mature enough to avoid this phase. In my experience, they say pointless things which annoy people like myself. For example, I was watching Calm Down Caitlin on YouTube last week, and I saw a comment which read as follows: "are conner and catlin in love" . First of all, this person seems to lack the intelligence to spell their names correctly, despite the latter's being in the title. Secondly, where on earth did this person get this idea from? Connor and Caitlin's dialogue in this episode is as follows:

Then, of course, there's the whole Luke + Millie thing. Seriously? Why, when a female character is introduced, must they be immediately paired up with the first male character they interact with? It's degrading, and insulting to the name of the Reverend Awdry.

The last (immediate) problem is people blaming HiT Entertainment for every negative factor in the series. The latest one is Connor and Caitlin's basis, being American engines. It had nothing to do with HiT! I'm fairly certain that that was decided between the writers and Arc Studios.

This fandom needs positive change; fast. We can only hope that it will come as the series changes for the better as well.

3. Trouble in the Shed

2. Toby Had a Little Lamb

2. Thomas and the Tuba

1. Percy and the Oil Painting

3. Thomas and the New Engine

1. Thomas and Skarloey's Big Day Out

2. Thomas and the Birthday Mail

1. Gordon and the Engineer

2. Percy and the Bandstand

3. James Works It Out

2. The Biggest Present of All

1. James in the Dark

1. Percy and the Calliope

1. Duck and the Slip Coaches

2. Tale of the Brave

3. King of the Railway

[ ]
Retrieved from "https://ttte.fandom.com/wiki/User:DuckFan98?oldid=1490911"
*Disclosure: Some of the links above are affiliate links, meaning, at no additional cost to you, Fandom will earn a commission if you click through and make a purchase. Community content is available under CC-BY-SA unless otherwise noted.