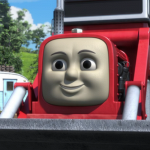 Like the template box says above, I'm James and this is my Wiki page. Scroll down to read more about me or check out some of the other tabs on my page if you have any questions!

Madge
Add a photo to this gallery

These are just all episodes I really liked from each season

Other places to find me

Retrieved from "https://ttte.fandom.com/wiki/User:James_the_Train_Lover?oldid=1719075"
*Disclosure: Some of the links above are affiliate links, meaning, at no additional cost to you, Fandom will earn a commission if you click through and make a purchase. Community content is available under CC-BY-SA unless otherwise noted.