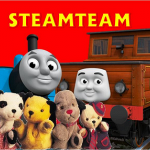 Hi everyone, I'm SteamTeam one of the admins here. I am now also an admin of the Sooty Wikia (see bottom of this page for link).

I live in the UK.

I am 22 years old (9th March 1994) and have watched Thomas since I was little. I loved it then and love it now. My favourite episodes are Stepney Gets Lost, Thomas, Percy and the Post Train and Off the Rails. My other favourite TV shows include Sooty, Family Guy and American Dad!

Listed below are my accounts on other websites, accounts related to me in some way or just my favourite websites that I visit frequently!

At the moment I'm hosting and writing SteamTeam Quizzes each week for Calico's YouTube channel. I'm also planning Series 2 of Ronnie the Mole and Recent Purchases.

And there's also a good chance I'll be listening to Phil Collins and Genesis whilst doing all of the above!

My Work for Other Users

I do quite a lot of voice work for other users' series as well as my own. Here's some of it:

I have also written for the following series:

I also provided many of the scripts for my own puppet show series "Ronnie the Mole" on Calico's channel. I also work as a head writer/script editor, puppeteer, assistant director, editor and producer on the series. I also wrote several scripts and provided many of the voices on my own TrackMaster series.

I don't very often write for other people's series due to not having the time, but I like to write episodes if I have a good idea.

If you would like me to take part in your series you can leave me a message here on the wikia, PM me on YouTube or email me at calicotv123@gmail.com

I act as a sort of "agent" for Calico as he is rather busy and has to use my equipment to record on anyway. Like me, he is always happy to voice in other people's series and is very versatile. His best voices include Peter Sam, Spencer, Gordon, Skarloey, Rheneas, Henry, 'Arry and Bert although I think he could probably voice any of the Thomas characters pretty well.

Here is some of his work:

If you would like him to appear in your series, it is probably best to contact me (as Calico rarely has time to check his own PMs) and I'll contact him directly on your behalf. Auditions are available on request although they may take a while to do as he can only record lines on Sundays.

So if you would like Calico to appear in your series, you can PM me, leave me a message here or email us at calicotv123@gmail.com

Season 7 was released in August 2011. It introduced Hank, Flora, and Jeremy to the series and also gave Salty a proper introduction. Hank and Salty are voiced by MurphyProductions828, Flora is voiced by PrettyRosie1995, and Jeremy was voiced by producer C.E.

There was also a Christmas special in 2011 which focused mainly on the road vehicles. It introduced Max and Monty and Butch into the series. Butch is voiced by Adamandthomas1997 and Max was voiced by Lbbrian. Monty is yet to speak. You can watch Snow Bother by clicking below:

Season six kicked off with a "pilot" episode, Saved You!, Monday September 6th, 2010. That was followed by a week's worth of episodes that were shown over the week starting on November 15th, 2010. It contained two television series-adapted episodes and six original creations written by myself and Thomasfan. It was also the first season to feature a voice cast (except Saved You!). Here's the episodes (to watch them, just click on them);

Aside from Season 6 we also showed two festive specials -

I would love to know you opinions on any of my remakes so feel free to leave a message on my talk page about them and I'll get back to you ASAP!

As I mentioned above, I now have a voice cast in my series. We have some roles that need filling ASAP so check this video out!. In the table below, you will find a list of the voice actors who star in my series and the characters they voice.

Episodes remade so far. I started these in 2006 so I can't remember all of them but here's some...

If you click on ones with symbols next to them, you will be able to watch them...

Behind the Scenes (and other TrackMaster/TOMY-related videos)

If you like special features, make sure you subscribe to producer C. BonEsterphon's channel. You can expect photo galleries, behind the scenes videos, episode commentaries and other exclusive videos!

Alternatively, here's a link to my channel where you can view all my remakes that I currently have on YouTube

Or you can join and visit my thread for updates on -

OR, you can visit

I have recorded numerous read-throughs (or audiobooks) on YouTube. These are mainly of magazine stories, but I have also covered some books. You can listen to the stories below by clicking on the titles.

I am currently narrating the Buzz Books series. So far I have recorded the first five books.

1. Thomas in Trouble
2. Toby and the Stout Gentleman
3. Percy Runs Away
4. Thomas and the Breakdown Train
5. Edward, Gordon and Henry
6. Thomas Goes Fishing
7. Thomas Down the Mine
8. James and the Troublesome Trucks
9. Gordon Off the Rails
More coming soon...

Aside from my usual read-throughs, I am now making a series of My Thomas Story Library audiobooks. They are narrated by TheTopHatts. Both myself and CalicoBonEsterphon provide voices for the series.

Being a big fan of the magazine stories, I have recorded quite a few read-throughs of these. You can listen to some of them by clicking on the titles below (not all are listed):

Whistle Limit
Good as New
Snake's Alive!
Blackout!
Thomas and the Rainbow!
Percy to the Rescue
Night Lights
The Birthday Ride
Thomas and the Fat Controller's Fishing Trip
What Goes Up...
Percy the Snowman
Cheesed Off!
Spencer's Race
Big Day Out
Blue Mountain Mystery
Works Outing
Captain Saves the Day
Up, Up and Away!
Big Belle
Parts for Percy
Beautiful Belle
Wonky Whistle
Rescue Team
One Bump Too Many
The Right Shape
Hiro Helps Out
Jumping Jobi Wood
A Special Treat!
The New Station
Roof Repairs!
All Steamed Up!

Here's the rest of the stuff I've narrated on YouTube!

Christmas in the Hills / Of Ice and Snow
Blue Mountain Mystery
Day of the Diesels
Percy the Small Engine and the Scarf
Thomas, Bertie and the Bumpy Line

Aside from my own videos, I do occasionally make appearances in other users' projects. I am always available for voice over work whether it is voicing characters or narrating. I have also written for other people's series, provided help with casting and been a producer. If you would like me to appear in your series, please let me know and I will get back to you ASAP. Auditions are available upon request.

SteamTeam Quizzes is a new series of videos that I write, present and co-direct with my friend and producer C. BonEsterphon. Each video sees C. BonEsterphon quizzed on either Thomas episodes or specials. They are, in his words, "to help him become more of a Thomas fan". Viewers are encouraged to join in at home and competitions are held at the end of each series.

Ronnie the Mole is about a blind mole and his friend Sam the dog. Series 1 started on May 14th with the pilot and ran for six episodes. A book, being written by TTTE Wikia's own Zem2point0, is in the works. You can watch a trailer for the show here: Click here to see the trailer.

Ronnie and the Birthday Cake
Make Way for Ronnie!
Ronnie the Artist
It's a Jungle Out There!
Now You See!
Ronnie's Cereal Disaster

I've also appeared (usually in person) in the following videos on Calico's channel:

Besides from my audiobooks and TrackMaster series, I have also made a series of Recent Purchases videos in which I showcase my recent Thomas & Friends-related purchases. They have proved to be quite popular on YouTube. You can watch them by clicking on the titles below:

Other recent purchase-style videos are available on my channel, but they do not feature voice-overs like the newer videos listed above.

My Friends on This Wikia

Whilst I've been here I've had communications with quite a few people. Everyone on this wikia is very friendly and it gives me pleasure to call these users friends.

Things that I have contributed to the Thomas community

Here is a small list of things that I have discovered for the Thomas community or my proudest achievements.

There have been more, but those are my proudest contributions.

Pages created by me

My opinion of CGI

When I first heard Thomas & Friends were moving to CGI, I was devastated, I thought it would completely ruin the series. I pre-ordered HOTR and when it came I had my doubts about it, but when I finally watched it I was amazed. I think all the people that dislike the new CGI Thomas should give it a chance. It brings more realism in my opinion, but, don't get me wrong, I loved the old Thomas and am still upset that it is an end of an era, but I think CGI might not be such a bad idea. Just take a look at the CGI promo of Cranky (below), the sea is so wonderfully realistic, something which never could be properly achieved in the model series.

Retrieved from "https://ttte.fandom.com/wiki/User:SteamTeam?oldid=1490936"
*Disclosure: Some of the links above are affiliate links, meaning, at no additional cost to you, Fandom will earn a commission if you click through and make a purchase. Community content is available under CC-BY-SA unless otherwise noted.