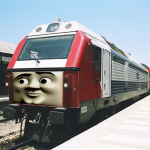 Shalom! I am The Israeli Sudrian, formerly known as "laG roiL". It may very well be safe to assume that I am (currently) the only (known) Israeli member of the Thomas & Friends fanbase. However, I am not the only Jewish (of Jewish descent) and/or Hebrew-speaking one, because CalleyFan is Jewish, Sparkshot knows Hebrew, and there are a few others. I am rather proud of this, and have made attempts to increase the number of fans in my country, in a somewhat similar manner to TheSodorSteamworks. A few of these have included promoting the show in the Film and Television boards of ANiMe-IL and Animez.co.il and starting a petition to release new Hebrew DVDs as was done with the first season and Magic Railroad. I'm hoping to be able to benefit from them at some point in the future.

From 2015 to (circa) mid 2017, I have translated, narrated and produced Hebrew fandubs of episodes that never aired in Israel (or have been lost in time), though I also intended to retranslate some that have been in order to produce better results than the official ones (and make it easier to find them in Hebrew online). Thanks to the existence of instrumental versions of said episodes, I have been able to retain the original music and sound effects without the need to replace them. Oliver11GWR's instrumental versions (before his original YouTube channel got terminated) have given wonderful results due to their high quality, and he has become a good virtual friend of mine ever since he contacted me. In addition, I have also translated some of the songs and performed them, including "The Island Song" in celebration of the 70th Anniversary.

I am also the founder, owner, admin and translator of תומספדיה (Thomaspedia), the Hebrew language version of the TTTE Wikia. I launched it on September 19th, 2014 after leaving the Hebrew Wikipedia, and it has been developed with initial assistance from Nehorai Mevorach Kahlon (under the username "Sani77"). It also has a TUGS minisite based on the TUGS Wiki, and a Shining Time Station one was planned but was never made. My main problem with the main Wikia's development is that the "real" TTTE Wikia updates very frequently, and I can't keep up with its pace all by myself.

Retrieved from "https://ttte.fandom.com/wiki/User:TheIsraeliSudrian?oldid=1658121"
*Disclosure: Some of the links above are affiliate links, meaning, at no additional cost to you, Fandom will earn a commission if you click through and make a purchase. Community content is available under CC-BY-SA unless otherwise noted.