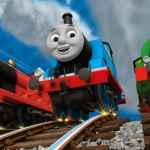 My name is Avery, and I've been a Thomas fan since I was born. I have a soft side for the Magic Railroad movie as that was the first time I ever saw my favorite blue train. I really loved the stories about all the characters and a big thanks to The Rev W. Awdry for making the best part of my childhood. I also have a YouTube channel "LittleBlueTrain67" and am currently working on 2 new Thomas series. I also have other interests besides Thomas such as, Mario, South Park, Smash Bros, My Little Pony( I'm a Brony), Gravity Falls, Sonic the Hedgehog and Legend of Zelda.

Diesel10.png
Add a photo to this gallery

Retrieved from "https://ttte.fandom.com/wiki/User:ThomastheTankEngine64?oldid=799842"
*Disclosure: Some of the links above are affiliate links, meaning, at no additional cost to you, Fandom will earn a commission if you click through and make a purchase. Community content is available under CC-BY-SA unless otherwise noted.