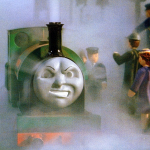 “Good evening you three! Aren't we all a fine sight?”
―Donald, Thomas and the Special Letter, fourth season[src]

Hey there, I'm Toby7 (Also known as Toby, Sean, or my personal favorite, Tobus)! I'm a music-loving kid who loves all things railway, especially Thomas and Friends and the Railway Series. Some say I'm bit eccentric, or simply crazy, and I agree with them! While I think the TV series will never be at it's best without going back to it's roots, I do enjoy it a lot, and feel It's one of the greatest franchises on the planet. Not to mention I love the CGI work Greg Tiernan and his fellow animators have done at Nitrogen Studios. The animation feels like it was right out of an illustration from a RWS book. I love Arc's work too. It reminds me of the models for some reason. Please, don't get me wrong though. I love the model series just the same!

I'm a friendly guy too, so don't be afraid to ask me for help or try to start a conversation with me. Just treat everyone the way you would want to be treated, follow the rules, and you'll fit in just fine! I'm also an administrator here, so if you have a problem here, I'm here to help! I'm also an admin on the Wiki Answers site, which is currently in the process of getting cleaned up :) I run the official TTTE Wikia Facebook page aswell. If you have any concerns about these sites, Just give me a ring!

I work on a railway in the New England region of the United States.

In this section I'll talk about my life with Thomas The Tank Engine and Friends.

Well, it all started out in a little gift shop that I visited on a holiday when I was little. There were some Brio trains. I don't remember any Thomas stuff, just normal wooden trains. This sparked my love for trains. Somehow my parents found a Thomas VHS, and since I was becoming a train-nut, they figured I would like it, and boy they were right. They were more than right, I was HOOKED! My parents continued to buy me VHSs, and they soon discovered Thomas Wooden Railway. I had became a Thomas fan. So, I went through that phase until Season 8, when I began to have more interest in real trains, like the Amtrak Acela or The Flying Scotsman. My last Thomas DVD was Steamies vs. Diesel and Other Thomas Adventures. Luckily, I kept all the DVD's and merchandise I had, but it was left untouched for a long time....

In December of 2007, I visited a young cousin in Califonia who was going through his own Thomas obession. I spent my visit playing and watching Thomas with him. When we took him out sight-seeing, Whenever he saw a streetcar (or tram if you live in Europe), he would shout out "TOBY!!!!" "IT'S TOBY!!!". That is how my favorite character became Toby.

So that visit re-lit my Thomas interest. I pulled out my old Thomas the Tank Engine: The Complete Collection. I soon realized the amazing work of Wilbert Awdry, and I wanted to learn more about the series. I went on online, and found this wiki. Unfortunetly in was spam filled, but little did I know that some great users were working on making it better. I also found SiF, and YouTube actually had a lot of info too! I started to collect DVD's, and I wanted to watch every episode in the series that I hadn't seen before.

I began using the wiki more around 2010 to use it as a checklist for DVD's and other things. I never really thought about becoming a user, but I still loved this site. When Misty Island Rescue came out, I used the site everyday for research, and soon my head became filled with Thomas info! In November of 2010, I became very ill, and Thomas was one of those things that kept me entertained. After I was hospitalized during the holiday season, I decided to create an account on Wikia, as I began noticing faults here that I felt could be improved.

One of my first contributations I made on the wiki was creating the page "The Quarry Tramroad", although I orginally called it "The Ffarquhar Tramway". I also alerted Thomasfan that "Description" was misspelt on the then-locked "Pop Goes Thomas" page. Ever since then, I have been an extremely active member here, becoming friends with many users.

About a month later, I decided to join a forum that I am still apart of today. It isThe Official Forums of TTTE Wiki, and was started by ZEM, one of the admins here. I highly recommend joining, as it has a friendly atmosphere and you can talk to fellow wiki users!

In July of 2011, I was absent from the wiki for one week. When I returned, I found that we had a ChatBox! Thomasfan quikly offered my a position as a chat moderator, and I didn't have to think twice about it! It proved that hard work does pay off, and I love having the responsiblity of making sure the ChatBox is a safe, happy, and enjoyable place!

2012 was a rough year, and I took a break from the wiki for the early winter. I came back in April 2012. Later that year I was informed that in a few months I would be promoted and in 2013 I was made an admin along with my close friends SkarloeyRailway and Oliverandtoad13.

So, That's my story. I plan to have many more adventures here, so this is only the beginning...

Retrieved from "https://ttte.fandom.com/wiki/User:Toby7?oldid=1490935"
*Disclosure: Some of the links above are affiliate links, meaning, at no additional cost to you, Fandom will earn a commission if you click through and make a purchase. Community content is available under CC-BY-SA unless otherwise noted.