A famous photographer named Paul Carter is taking pictures to be used for Sodor's latest holiday poster, but the Fat Controller and the Mayor have difficulty deciding which photograph to use. Mr. Carter points out that in each different photograph he took of the engines, an engine is doing something special, like Thomas running his branch line, Henry pulling the Flying Kipper, and James puffing by the coast. The Fat Controller realises that his railway and his engines are what make the Island very special. Later, Mr. Carter gathers Thomas and his friends for one last special photograph. 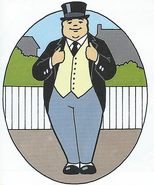