Thomas the Tank Engine Wikia
Register
Don't have an account?
Sign In
Advertisement
in: Steam locomotives, Annuals and Magazines, Tank engines,
and 5 more

“If you were me, you'd be bad tempered too.”
―Victor to James, Old Victor, magazine story

Victor was retired and having been withdrawn from service, he was nearly scrapped. However, he was later discovered and restored into a children's playground. James was responsible for him when he was on a flatbed. However, James later accidentally lost him and found him in the playground. Victor now sits in a park and enjoys the company of children around him.

Victor appeared to be a very grumpy engine and would not talk to anyone until it was revealed that he was sure he was going to be scrapped. After settling down in a children's playground this demeanour changed and now he is a very cheerful engine.

Victor's basis is unknown, but he bears a strong resemblance to the North British Railway's P class, later the LNER Drummond D50 4-4-0T, albeit with a few slight differences. The D50 has a different shaped smokebox, differently shaped windows and a longer wheelbase compared to Victor.

Victor is painted blue with red lining. His dome, safety valves and funnel decoration are also brass and his wheels are painted grey. 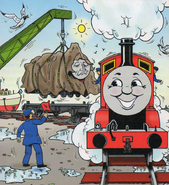 Victor on a flatbed

Victor's possible basis
Magazines & Annuals
*Disclosure: Some of the links above are affiliate links, meaning, at no additional cost to you, Fandom will earn a commission if you click through and make a purchase. Community content is available under CC-BY-SA unless otherwise noted.
Advertisement