“PARP! What a couple of slowcoaches! BRRM! VRRM! No wonder customers want me to deliver their goods for them!”
―Lorry 1

Wait with Freight is a magazine story.

One day, Thomas stops at a signal near a canal and sees Bulstrode carrying some goods. Thomas teases the barge about his speed, but Bulstrode blames his slowness on the fact that he has to wait at the locks. A bit later, Thomas is waiting at a level crossing when Bulstrode smugly chuffs up and teases Thomas. Just then, Lorry 1 roars past with bricks and timber boasting cheekily. The lorry goes on to boast that nothing slows him down, but he is so busy boasting, he fails to see a red traffic light - until it is too late. He tries to stop, but he ends up skidding off the road, through a hedge, and into a field. Luckily, no one is hurt, but Lorry 1's load spills everywhere! Now, it's Bulstrode and Thomas' turn to tease the lorry. 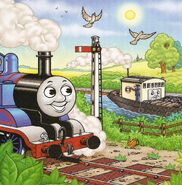 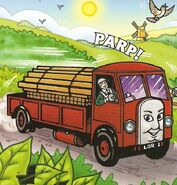 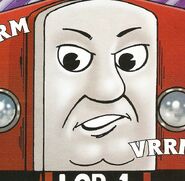 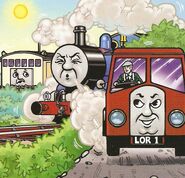 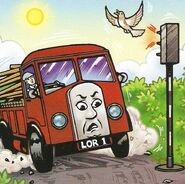 Add a photo to this gallery
Retrieved from "https://ttte.fandom.com/wiki/Wait_with_Freight?oldid=1671744"
*Disclosure: Some of the links above are affiliate links, meaning, at no additional cost to you, Fandom will earn a commission if you click through and make a purchase. Community content is available under CC-BY-SA unless otherwise noted.