Watch Out, Gordon! is a magazine story.

Gordon is in a foul mood. It is time for Diesel's weekly clean and it is Gordon's turn to do his jobs, including taking a goods train. Gordon wants to get the job over with as quickly as possible, but the signal light stay red. Impatient Gordon slips his brakes on and speeds down the track as the driver frantically tries to reapply the brakes. Gordon turns a bend and in front of him is a fallen tree. Both his driver and his fireman try to apply the brakes, but they cannot make Gordon stop in time. The big engine collides with the tree and dents his fender. Gordon is upset, but his driver tells him that it serves him right; rules are there to be obeyed. 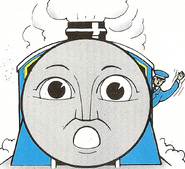 Add a photo to this gallery
Retrieved from "https://ttte.fandom.com/wiki/Watch_Out,_Gordon!?oldid=1421387"
*Disclosure: Some of the links above are affiliate links, meaning, at no additional cost to you, Fandom will earn a commission if you click through and make a purchase. Community content is available under CC-BY-SA unless otherwise noted.