St Tibba's Hospital, also known as Wellsworth Hospital,[1] is the main medical facility on the Island of Sodor, situated at Wellsworth.

St Tibba's Hospital was established by an Order of nuns, the Poor Clares, in the 13th century, who built it around the well near their Nunnery, the water from which was said to perform remarkable cures. Though King Henry VIII nominally suppressed the Order in 1534, the Sudrian interpretation of the Act secured that St Tibba's Hospital remained and expanded as need arose. Shortly before 1987, it was rebuilt on a new site and has deservedly the highest reputation of any hospital on the Island. It is a large, modern facility and serves people from across the Island.[2]

Harold once rescued some injured hikers and took them to the hospital.

The hospital was first mentioned in the third series episode, All at Sea, where an injured sailor needed treatment after hurting his hand in the regatta.

In the twenty-third series episode, Out of Site, the Sodor Construction Company were constructing a new building for the hospital. 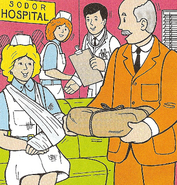 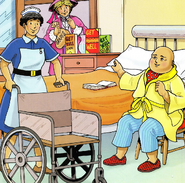 The Main Line
* RWS only | ** T&F only
Retrieved from "https://ttte.fandom.com/wiki/Wellsworth_Hospital?oldid=1724075"
*Disclosure: Some of the links above are affiliate links, meaning, at no additional cost to you, Fandom will earn a commission if you click through and make a purchase. Community content is available under CC-BY-SA unless otherwise noted.