The scrap is broken into pieces, loaded into trucks, and Edward pulls them to the Steelworks where they are melted down and used again. Trevor was sent to be scrapped here when his master deemed he was old-fashioned. Thankfully, Edward persuaded the Vicar of Wellsworth to purchase him and saved him from scrap.

It first appeared in the Railway Series book, Edward the Blue Engine. 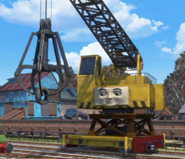 Reg
Add a photo to this gallery

Brendam Branch Line
* RWS only | ** T&F only
Retrieved from "https://ttte.fandom.com/wiki/Wellsworth_Scrap_Yard?oldid=1762078"
*Disclosure: Some of the links above are affiliate links, meaning, at no additional cost to you, Fandom will earn a commission if you click through and make a purchase. Community content is available under CC-BY-SA unless otherwise noted.