Wellsworth Town Hall is a building located in the town of Wellsworth, which is usually used for important meetings, speeches or parties.

In its first appearance, Sir Topham Hatt gave a speech about railways here.

Stephen and Bridget Hatt later competed - and won - in a poetry competition here.

When the town hall's roof required repairing, Percy was sent to collect the building materials, however a signal failure held him up and he had to accept help from two of The Horrid Lorries.

During one winter, Thomas took Sir Topham Hatt to a dinner with the Mayor of Wellsworth. Another dinner was held at the hall during one of Spencer's visits to the Island of Sodor. 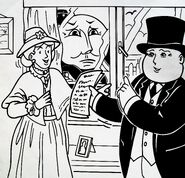 The Fat Controller making a speech at the hall
Add a photo to this gallery
The Main Line
* RWS only | ** T&F only
Brendam Branch Line
* RWS only | ** T&F only
Retrieved from "https://ttte.fandom.com/wiki/Wellsworth_Town_Hall?oldid=1696758"
*Disclosure: Some of the links above are affiliate links, meaning, at no additional cost to you, Fandom will earn a commission if you click through and make a purchase. Community content is available under CC-BY-SA unless otherwise noted.