“I wouldn't want to visit a dustbin factory, though, would you?”
―Henry

What's That Smell?
A Sweet Smell

What's That Smell? is a magazine story. It was retitled A Sweet Smell when it was published in the Thomas Express Special magazine.

One afternoon, two smartly dressed women board Henry's train; they are talking about visiting a nearby factory. Henry is curious to find out which factory they visited, as there are lots of them at Knapford. At the next station, a husband and wife can smell a sweet scent wafting from one of Henry's carriages. At Wellsworth, everyone who got on and off of Henry's train remarks about the smell. Then, the two women who boarded at Knapford step down from the train and explain that they had visited a perfume factory and that some "Sodor Dew" fragrance had gotten spilt in one of the coaches. Henry does not like the smell and steams off hastily; trying to lose the scent. 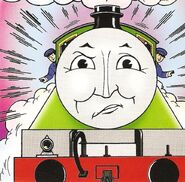 Add a photo to this gallery
Retrieved from "https://ttte.fandom.com/wiki/What%27s_That_Smell%3F?oldid=1504035"
*Disclosure: Some of the links above are affiliate links, meaning, at no additional cost to you, Fandom will earn a commission if you click through and make a purchase. Community content is available under CC-BY-SA unless otherwise noted.