“Ha! You'll never be a grand engine like me! Grand engines are strong and proud and don't pull rubbish trucks!”
―Spencer

Whiff arrives at a junction where there is a rubbish truck to collect. Then Emily clatters up hauling some coal trucks. Whiff remembers that grand engines should be strong and offers to take some of Emily's trucks. Emily gratefully accepts Whiff's offer and Whiff bustles away with the coal trucks, leaving the rubbish behind. Along the line, Whiff finds another rubbish truck just as Edward puffs past with a flatbed of fence posts. Whiff chases after Edward and offers to deliver the posts. Edward agrees and soon Whiff puffs away without the rubbish truck. Whiff is sure he is nearly a grand engine now.

Whiff soon comes to a bend in the line and sees Percy at a standstill ahead of him. Whiff gives a blast on his whistle to let Percy know he is approaching, but Percy does not budge an inch. Whiff applies his brakes, hoping to stop in time, but he bumps into Percy who had not been able to move because a rubbish truck is blocking the line. Whiff feels very guilty, especially now as Percy will be late delivering the mail. Whiff thinks Percy is a grand engine for doing his job so well. Whiff then realises that doing his own jobs well will make a him a grand engine and he quickly races away. First, he delivers the fence posts and then takes the coal trucks to the coal hopper. Finally, Whiff races around the island collecting rubbish trucks.

Later on, Whiff meets Spencer, who teases him again. Whiff did not let Spencer's teasing bother him this time. Then Gordon rumbles in with the express. The Fat Controller opens a carriage door and tells Whiff that he has been a very grand engine for doing such a good job. Whiff whistles loudly in delight - just like a grand engine. 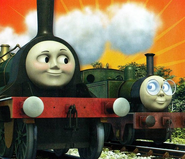 Add a photo to this gallery
Retrieved from "https://ttte.fandom.com/wiki/Whiff%27s_Wish_(magazine_story)?oldid=1438185"
Community content is available under CC-BY-SA unless otherwise noted.