In 2007, Whiff made his debut in the eleventh series of Thomas & Friends in the episode, Emily's Rubbish.

When the show transitioned into full CGI in 2009, Whiff was absent for a year and later returned in the 2010 special, Misty Island Rescue.

Since his return in 2010, Whiff has been voiced by Keith Wickham in the British English dub and William Hope in the American English dub. Both give him British and American accents, respectively.

Whiff's model was built as a North Eastern Railway's 2-2-4T No. 66, named "Aerolite". It was built to approximately 1/32 scale and designed to run on gauge 1 track.

Four facial expressions were sculpted for Whiff, although two sad faces were not used on-screen. The faces were first sculpted in clay and from that resin casts were made using a silicone mould.

The model body was made from brass. While only one body was made, two complete chassis' were constructed from scratch (CNC). The chassis had two motors, both powered by electricity from the track via the pickups on the metal wheels. The main motor powered the wheels, while the second motor (located at the back) powered an inside piston for the smoke mechanism. 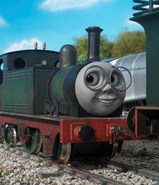 Whiff's Series 12 face reference sheet, courtesy of TomsProps on Twitter [Note: The unused sad faces on the right][1]
Add a photo to this gallery

The twelfth series marked the beginning of the show's transition into CGI and the characters' faces were animated through CGI with the aid of motion capture animation. The physical models' moulded faces were replaced by white targets with triangles to fix a computer-animated face in post-production. Whiff's resin faces were only used in background shots.

Whiff has had modifications during his tenure in the model era. These include:

Close-up shots of Whiff's cab were required for scenes in where he had to interact with close-up scale figures. The model was not complete and only portions of the cab were built. Whiff's close-up model only appeared in the twelfth series episode, Toby's Special Surprise.

In 2009, the series introduced Computer-Generated Imagery (CGI) as a replacement for the show's long-standing live-action models. Whiff was recreated from scratch in CGI by Nitrogen Studios. His model was "hand-sculpted" in Maya, a 3D animation and modelling software.

Photographs of Whiff's Gauge 1 model were used for referencing. According to Greg Tiernan, every detail of the original television series models for each character is carefully reproduced in the CGI model. The models are subjected to many rounds of review before they are submitted to HiT Entertainment for final input and approval.

Whiff has had modifications throughout the CGI series. These include:

Retrieved from "https://ttte.fandom.com/wiki/Whiff/Behind_the_Scenes?oldid=1777791"
*Disclosure: Some of the links above are affiliate links, meaning, at no additional cost to you, Fandom will earn a commission if you click through and make a purchase. Community content is available under CC-BY-SA unless otherwise noted.