Thomas the Tank Engine
and Friends 11

Whistles and Sneezes is a magazine story.

Gordon is very cross; he is complaining about Henry getting a new shape. He also comments about Henry's whistling, stating that no respectable engine ever whistles loudly at stations. Henry is upset, but Percy is pleased to have Henry home again and tells him so.

Later, Henry stops at Edward's station. Edward is commenting on how splendid Henry's whistle is, when they hear a whistling. Edward says it sounds like Gordon, and it should be Gordon, but Gordon never whistles in such a way. It is Gordon. He rushes down the hill at a terrible rate, screams straight through the station, and disappears. Henry chuckles and tells Edward what Gordon had said earlier that day.

At the station, everyone holds their ears. The noise coming from Gordon is awful and has to be stopped. Two fitters climb up and knock the whistle valve back in place. That night, Gordon slinks slowly into the sheds. No one mentions whistles.

Next morning, Henry is enjoying himself enormously. Soon, he sees some boys on a bridge and he whistles hello. The boys do not take Henry's number and wave, they think it fun to drop stones on him. The stones break the carriages' windows, leaving the coaches sobbing. The passengers are not hurt, but they are cross and one man suggests that the police be called. Henry's driver has an idea and tells the passengers that Henry is going to sneeze at the boys.

Lots of people are waiting before the bridge to watch the event. The driver instructs the passengers to keep all windows shut until they have passed the bridge. Soon they can see the boys and they all have stones. Henry sneezes and is happy to have taught Gordon and the silly boys a lesson with a whistle and sneeze. 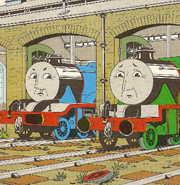 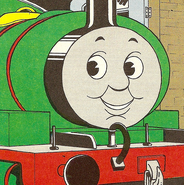 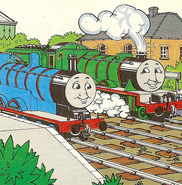 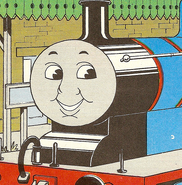 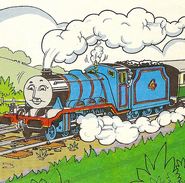 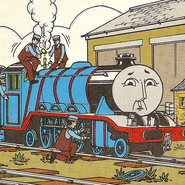 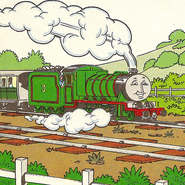 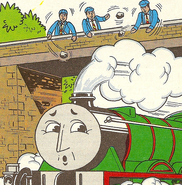 Add a photo to this gallery
Retrieved from "https://ttte.fandom.com/wiki/Whistles_and_Sneezes_(magazine_story)?oldid=1688244"
*Disclosure: Some of the links above are affiliate links, meaning, at no additional cost to you, Fandom will earn a commission if you click through and make a purchase. Community content is available under CC-BY-SA unless otherwise noted.