“I'm higher and mightier than you posh steampots now!”
―George

One day, Gordon is pulling the express across a railway bridge when he has to stop at a signal. On the other line, Spencer pulls up and the two engines huff grandly beside each other. Beaneath the bridge, George is helping to resurface the road. Thick black smoke blows from his funnel towards Gordon and Spencer who complain noisily. George gives his usual grumpy response. Gordon tells Spencer to take no notice of George as he is just jealous that they are so splendid. Then, the signal changes and the two engines are on their way. George calls that they will soon see who is highest and mightiest. Gordon and Spencer are puzzled, but not for long.

Shortly, George arrives to work on a new flyover that is being built over the main line. George finds it funny that, before long, Gordon and Spencer will have to look up to cars everyday. For weeks, George enjoys himself working above the engines.

At last, the flyover is ready. George and the workmen are invited to watch it being opened by the Duke and Duchess of Boxford. They do not arrive on Spencer who is sent to collect other special guests, such as the Mayor and the Fat Controller, with Gordon.

Then, comes a loud whirring noise. Next moment, hovering above George, the crowd and the two engines, comes Harold with the Duke and Duchess. Both Spencer and Gordon agree that Harold might not be the mightiest, but he is certainly the highest. George just scowls. 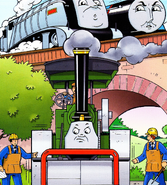 Add a photo to this gallery
Retrieved from "https://ttte.fandom.com/wiki/Who%27s_Highest%3F?oldid=1241803"
*Disclosure: Some of the links above are affiliate links, meaning, at no additional cost to you, Fandom will earn a commission if you click through and make a purchase. Community content is available under CC-BY-SA unless otherwise noted.