Wilfred is a narrow gauge mountain-climbing engine who works on the Culdee Fell Railway. Like the other mountain engines, he has his own coach used for passenger services.

Wilfred was built at the Swiss Locomotive and Machine Works in Winterthur, Switzerland, in 1900. Soon afterwards, he arrived on Sodor during the opening of the Culdee Fell Railway alongside the other four engines in time for the railway's inspection and opening.

Following Godred's accident shortly after opening, Wilfred and the three other engines worked the line successfully for 60 years. They were carefully maintained and sent back, in rotation, to the builders in Switzerland for overhaul.[1]

When Culdee returned from an overhaul, Wilfred and Ernest informed him about changes that happened to the railway. Later, Wilfred and his coach were later delayed at the Summit after Lord Harry derailed at the points. Culdee and Wilfred teased him for being a "wreck". Wilfred was later present when Lord Harry was renamed Patrick.[2]

Wilfred is a kind old mountain engine. A hard worker, he is very cautious and gets upset at the carelessness of the other engines. He is known as the musical engine by the other mountain engines because he loves to whistle as he ascends and descends the steep hills.

Wilfred is based on No. 3 Wyddfa, an engine who works on the Snowdon Mountain Railway. 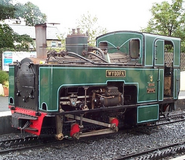 Wilfred is painted in the Culdee Fell Railway's livery of purple with orange lining. His number (3) is painted on the sides and back of his cab in yellow and he has a red nameplate with a gold boarder on the sides of his tanks with his name (Wilfred) on them, also in gold. His buffer beams are painted red.

“Wilfred," Culdee called. "Who is this wreck?!"
"It's Lord Harry, didn't you know?"
"It looks like Old Harry, its fat as Old Harry. But of course, it can't be Old Harry."
"Why ever not?"
"You see Old Harry's an up-to date engine. He can go twice our speed in perfect safety!”
―Wilfred and Culdee mocking Lord Harry, "Danger Points", "Mountain Engines"

Culdee Fell Railway
Español עברית Polski Русский
*Disclosure: Some of the links above are affiliate links, meaning, at no additional cost to you, Fandom will earn a commission if you click through and make a purchase. Community content is available under CC-BY-SA unless otherwise noted.
Advertisement