“We all wished to be together under the star!”
―Percy

Winter Wish is a magazine story illustrated using photographs from the television series.

Knapford is to be decorated with lots of festive lights, including one very special big light - the Star of Knapford. Salty tells Thomas, Percy, and James what is special about the star; if an engine passes it and makes a wish, the wish may come true. The engines were very excited, especially Thomas who is given the job of transporting the star from the docks to Knapford.

On his journey, Thomas sees Percy puff over a bridge in front of him. Thomas, thinking Percy would like the opportunity of making a wish on the star, chases after his friend. Percy does make a wish and soon Thomas is on his way again. Further along the line, Thomas meets Henry and allows him to make a wish too. Not long after, he sees James and chases after him. He puffs over Gordon's Hill and finds that, once on the other side, he cannot stop. When he does manage to successfully apply his brakes, the star shoots off of Thomas' flatbed and flies through the sky.

The star lands in front of Thomas, broken. Thomas is very upset; not only has he ruined the star, his friends' wishes may not come true either. Henry, Percy and James had seen the star soaring through the sky and rush to help. Henry fetches some workmen to mend the star and James collects Rocky to lift the star back onto Thomas' flatbed. Soon they are all on their way to Knapford. 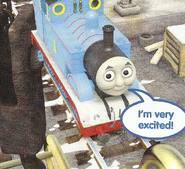 Add a photo to this gallery
Retrieved from "https://ttte.fandom.com/wiki/Winter_Wish?oldid=1769951"
*Disclosure: Some of the links above are affiliate links, meaning, at no additional cost to you, Fandom will earn a commission if you click through and make a purchase. Community content is available under CC-BY-SA unless otherwise noted.