“Thanks for my whistle!"
"I went on a whistle-stop tour to find one for you!”
―George and Edward[src]

Wonky Whistle! is a magazine story.

When Edward pulls up at a nearby signal, George is resurfacing a main road and gives off a loud "Peep" on his new whistle. He is so busy huffing and puffing that he blows out too much smoke and blindly runs into a tree and a low-hanging branch jams in his whistle (a fact that he blames Edward for). He tries his whistle again and it lets out a really loud shrieking noise which hurts the workmen's ears and makes Edward's rivets tingle! Later, Edward meets Bill and Ben, who laugh about George's wonky whistle. Soon, Edward returns to the Main Station and finds the other engines laughing. Now, he feels sorry for the grumpy steamroller.

Edward is given the afternoon off and goes to search Sodor. After visiting the ironworks and many scrapyards, he eventually finds what he's looking for. He takes his item to the Works where an engineer fixes it up and collects it the next morning. Then, he sets off to find George and, when he does, he gets his driver to present the steamroller with a whistle! Soon, the whistle is fitted and George thanks Edward! 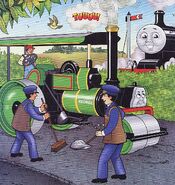 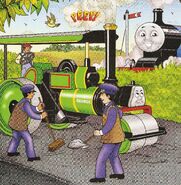 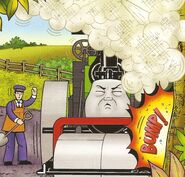 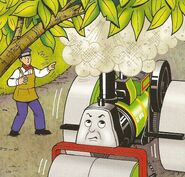 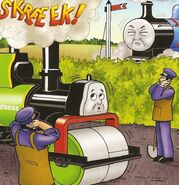 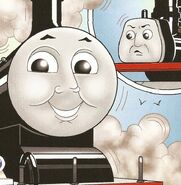 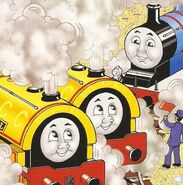 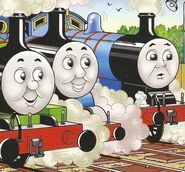 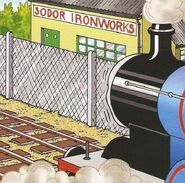 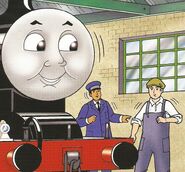 Add a photo to this gallery
Retrieved from "https://ttte.fandom.com/wiki/Wonky_Whistle!_(magazine_story)?oldid=851913"
*Disclosure: Some of the links above are affiliate links, meaning, at no additional cost to you, Fandom will earn a commission if you click through and make a purchase. Community content is available under CC-BY-SA unless otherwise noted.