“You're like a green caterpillar with red stripes!”
―Thomas

Thomas the Tank Engine
and Friends 21

Woolly Bear is a magazine story.

In summertime, a group of gangers cut the long grass on the line side and rake it into heaps to dry in the hot sun. Percy stops to collect the hay as the men load them into the trucks for him to take to the station, and then Toby takes them to the hills for the farmers to feed their stock. One morning Percy gives Thomas a spooky whistle, but that does not scare Thomas any more as he remarks that his ugly face is enough to frighten anybody, and calls him "a green caterpillar with red stripes" because Percy is being late every afternoon in the week.

The remark leaves Percy feeling cross and he decides to teach Thomas how he will eventually be on time, and really useful as he takes his trucks to the harbour. But as he and his crew decide to head for home early, a crate of treacle hanging over Percy falls down and covers him. He is now in a very sticky situation, which does not help matters as he chuffs along the line, with the wind blowing the piles of hay over onto Percy and the track - which makes it slippery for Percy to grip until he grinds to a halt, and he has to wait until the line ahead is clear.

Later that afternoon, Thomas grows impatient with Percy being late again. Suddenly, when everyone spots Percy - who is now covered in hay, they laugh at how he looks like a hairy caterpillar. Percy apologises as Thomas starts to tease him even more. When Percy heads back to the shed, his driver shows him what he looks like in a mirror - much to his surprise! He finds out that he looks like a woolly bear.

However it takes him a long time to be cleaned, as Thomas and Toby arrive home and make lots of jokes about "woolly bear" caterpillars and other crawly creatures. 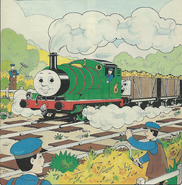 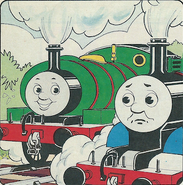 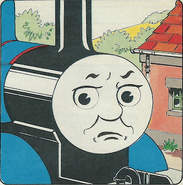 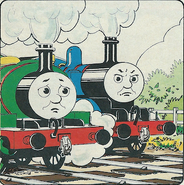 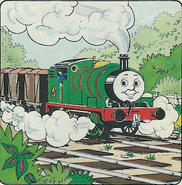 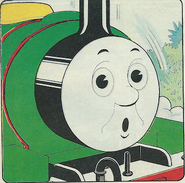 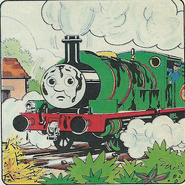 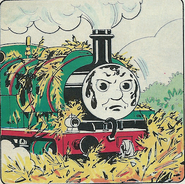 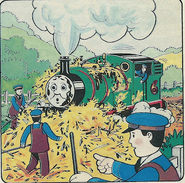 Add a photo to this gallery
Retrieved from "https://ttte.fandom.com/wiki/Woolly_Bear_(magazine_story)?oldid=1697633"
*Disclosure: Some of the links above are affiliate links, meaning, at no additional cost to you, Fandom will earn a commission if you click through and make a purchase. Community content is available under CC-BY-SA unless otherwise noted.