There have been several workshop engines that have appeared in the Railway Series, television series and the magazines stories.

Many engines appeared at the workshop where Percy used to live before arriving on Sodor. The Fat Controller came to the Workshop to purchase a new tank engine, when the three big engines (Henry, Gordon, and James) went on strike and Thomas left to run his branch line.

Percy's friends featured in the Railway Series Painting Book No.4

Percy with the workshop engines 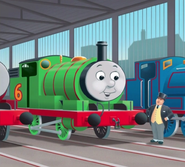 When Edward was sent to the works to be mended, he met three engines. Edward was quick to befriend these engines, due to their positive attitude towards him.

The first engine, on Edward's right, is a silver diesel engine. This one was based on a Bulleid 10201 class diesel-electric; all of which had been scrapped by the mid 1960's. The second engine, on Edward's left, is a tender engine and who strongly resembles a green version of Murdoch with green smoke deflectors. Although it resembles more of a BR Standard Class 6. Finally, the last engine can be seen behind Edward, however only his/her smokebox and eyes are visible and he/she appears to be painted salmon.

The Green Engine with smoke deflectors

The Silver Diesel and the third engine at the back

The Blue Overhauled Engine was a tender engine, who was undergoing an overhaul similar to Henry's new design. He/she was first seen when Henry was being escorted to the Works by Percy. Henry was shocked to learn that the works was full of ill engines.

This engine slightly resembles Henry, with slightly different cylinders and blue paint work and also looks a bit like Gordon. 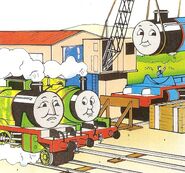 Henry, Percy and the Blue Engine
Add a photo to this gallery
United Kingdom
* RWS only | ** T&F only
Other Sudrian railways
* RWS only | ** T&F only
Retrieved from "https://ttte.fandom.com/wiki/Workshop_Engines?oldid=1797091"
*Disclosure: Some of the links above are affiliate links, meaning, at no additional cost to you, Fandom will earn a commission if you click through and make a purchase. Community content is available under CC-BY-SA unless otherwise noted.